In 2014, the “Iran Geometry Olympiad” was launched by a group consisting of activists of the Mathematical Olympiad in Iran. Now, this competition is held annually in four different levels with the participation of students in grades 7-12 and geometry lovers who graduated from schools around the world.

IGO 2022 Final Results (Medals)
IGO 2022 All Exams
Register
Support IGO by donating a small amount of money. This will help us to cover the costs of IGO
Read more and donate 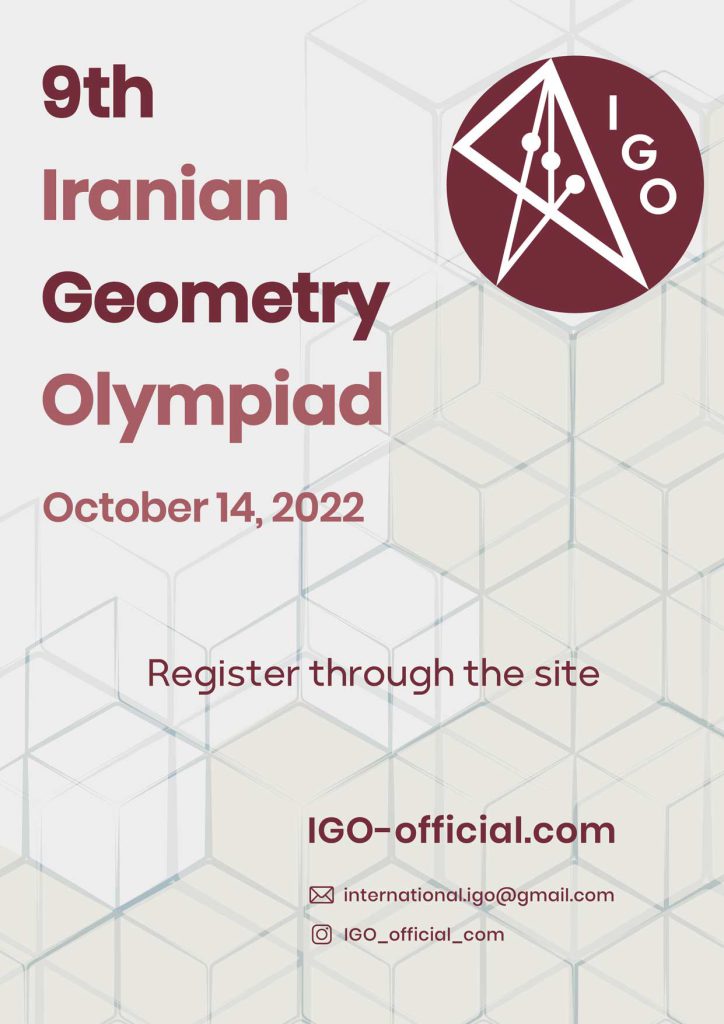 The first edition of IGO was in 2014. The contest date was September 4 (the Birthdate of Abu Reyhan Al-Biruni, an Iranian polymath from the 10th century) in two different levels (elementary and advanced). This event was organized with the support of the Iranian National Mathematical Olympiad Committee in two main cities of Iran, Tehran (the capital) and Isfahan. The Sharif University of Technology in Tehran and the Mathematics House in Isfahan hosted the competition in 2014.

IGO 2015 was the first occurrence of IGO as an international event. In 2015, the organizers decided to promote the exam by increasing the number of Iranian participants and also by inviting other countries to hold the exam. In total, 23 other countries accepted the invitation, and the exam was held on September 3, 2015, with more than 650 students from 24 countries. In Iran, the host of the contest was Sharif University of Technology (Tehran). Also, this year, the structure of the competition has changed from the first year. The competition was held in four levels, including elementary, intermediate, advanced (for students in grades 7-12), and a free level (with no limit on the age and specialized for interested persons who have graduated from school). The exam of each level consisted of 5 problems.

The 3rd IGO was held on September 8, 2016, with the participation of 2500 contestants from 31 different countries. In Iran, three different cities, Tehran, Mashhad, and Tabriz, hosted it.

In 2017, the event faced a significant increase in the number of participants and countries. Almost 4000 contestants from 40 countries attended the 4th IGO holding on September 7, 2017. In Iran, four cities, Tehran, Mashhad, Tabriz, and Shiraz, hosted the exam.

The 5th IGO was hosted in more than 150 cities from 56 countries. The exam date was September 6, 2018, and the number of contestants was more than 5400. In Iran, the event was held in five cities, Tehran, Mashhad, Tabriz, Shiraz, and Isfahan.

The 6th IGO was held on September 13, 2019, with the participation of more than 6100 contestants from 55 countries. This event was hosted by more than 200 cities in different countries, including eight cities in Iran, Tehran, Mashhad, Tabriz, Shiraz, Ardebil, Karaj, Kerman, and Yazd.

The organization of the 7th IGO was affected by the coronavirus pandemic. The exam date shifted from September. According to the restrictions due to the pandemic and the importance of students' health, the organizing committee decided to hold the exam online. More than 5200 contestants from 49 countries attended IGO 2020, which was held on October 30, 2020.

The continuation of the coronavirus pandemic caused some countries to hold IGO 2021 online and some in-person. The exam date was November 5, 2021 and in total nearly 4600 students from 59 countries participated in the contest.